A TALE OF TWINS, TENNIS, AND TENACITY 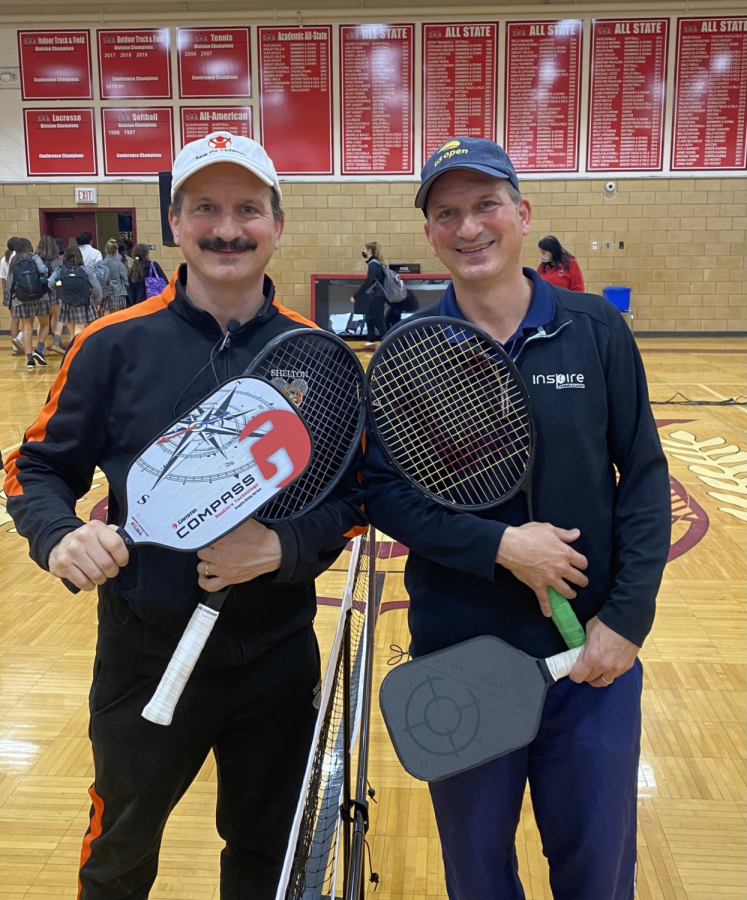 A common theme often found within the Sacred Heart Academy curriculum and seen in day-to-day school life is the concept of striving to do your best. We set goals only to exceed them, whether it be in the classroom; through things such as new scientific research found and published by Dr. Sengupta’s Honors Biotechnology class, on the fields; with the 2021-2022 SHAthletes setting a school record for the most state titles secured in a year, or in our local communities; as practically every club at SHA has found a way to make an impact on our world, and beyond our school community.

This message of achievement through passion and grit was relayed to the student body through one of our recent Excelsior Enrichment Presentations, as a part of the Excelsior Fridays Enrichment Program. Students gathered on gym bleachers to listen to Guinness World Record holders Angelo Rosetti (father of SHA student Maddy Rosetti ’24) and his twin brother, Ettore Rosetti, as they expressed in a lively and interesting way the necessity of tenacity in their successes, and ours as well.

The Rosetti’s currently hold the World Records for the longest tennis rally, first set in 2008, but then broken in 2015 and with a whopping 30,576 strokes – doing so in a third of the time spent on the first set record, with a time of 14 hours and 31 minutes. More recently, this impressive pair also set the World Record for the longest pickleball rally, with 16,046 volleys in six hours, doing so on this past World Mental Health Day, on October 10, 2021.

Just as these notable records did not come without prior failure and trials-and-errors, these accomplishments did not come about without the inspiration of a greater cause. The Rosetti’s knew that their successes, if occurred, would render a good amount of public and media attention. They also knew that these Records were about more than just the recognition. Because of this, the twins utilized their own talents and successes to raise awareness for causes that had affected their lives or the lives of those they knew, including ALS, mental health, and childhood contraction of/death through preventable diseases. Each World Record Breaking Event was never only about the Rosettis – instead, each attempt was seen as merely an opportunity to give back and was quite successful as $100,000 was raised for the Save the Children Foundation. This earned the selfless pair a Humanitarian Stream Team Award.

Angelo and Ettore provided SHA students with an amusing and interactive showcase of their talents and secrets to success as they volleyed and told stories with great enthusiasm. Students were welcomed to ask questions, try volleying, and some were awarded t-shirts. However, the greatest things that students left with that day was furthered wisdom through Angelo and Ettore’s “four Gs of success”: Get a dream, Goal set, Goal get, and Give back, along with a closing piece of advice to “love what you do and serve others first” (pun intended).

Ettore and Angelo Rosetti recently published their book Tennacity: The Tenacious Mindset On & Off the Court, a great read and mental preparation for the trials and tribulations of not only sports such as tennis, but general, daily life. This novel gives insight on how to master inner thought, self-expectations, finding peace within your own journey, and learning to do things for yourself as well as others.

“This past Excelsior Enrichment Friday Assembly was definitely my favorite so far. The Rosetti brothers were interesting, insightful, and entertaining speakers that really made evident the importance of nurturing your own passions while also branching out and making use of opportunities to help others.”