Sacred Heart Volleyball had a successful season this past fall. When looking back on the season, sophomore Justine Manning, who played on the junior varsity and varsity teams, said “Although we had a rocky beginning to our season, we stayed together as a team, we worked hard, and we ended up placing high in SCCs and states, which hadn’t happened in such a long time for SHA volleyball.” The volleyball season this year was action packed and exciting for all the teams; freshman, junior varsity, and varsity. The varsity team made it to the Southern Connecticut State Conference (SCC) and the Connecticut Girls State Volleyball Tournament (CIAC). The girls qualified for States within the first half of their season and completed the regular season with 13 wins and 7 losses. In SCC the team got past the first round, beating Mercy in a home match 3-2, but then losing to Shelton in the quarterfinal match 3-0. In the State Tournament, the girls won the first round against Wethersfield in a home match, 3-0, but then lost to RHAM in the second round game 3-0.

The varsity team was made up of sophomores, juniors, and seniors. The seniors for the 2019 season were Ali Bonadies, Julia Davis, Natalie Davis, Ally Kirck, Nina Longobardi, and Jillian Manning, and the captains were Natalie Davis, Nina Longobardi, and Jillian Manning. Various members of the volleyball team were honored at the Fall Athletic Banquet, which took place at the end of November. The sportsmanship award went to Julia Davis, Ali Bonadies received the most improved award, and Jillian Manning was awarded the most valuable player award. Along with that Julia Davis was the volleyball team’s nominee for the Athletic Department’s Excelsior Award, and she won the award. Lastly, Jillian Manning was named to the All-SCC Second Team.

Overall, the Sacred Heart Academy Volleyball team had a successful season this past fall and got a chance to improve their skills, get closer with their teammates, and have fun throughout the whole season. The team got to play together and enjoy the season with fun events such as the “dig pink” game and senior night. Freshman Candace Lavache, who played on the freshman and junior varsity teams, reflected on the season by saying, “As a freshman, my first year playing volleyball at SHA was very nice. I was able to learn the game, play, bond, and overall enjoy myself with the freshman, JV, and varsity team”. Similarly, captain Jillian Manning looks back on the season as, “I believe that although this season had had a bit of a rough start, our coach and team really got close and performed to the best of our ability and got really far in post season. I’m wishing the best for the future teams!”. While the season has come to an end, SHA volleyball had a great season for all the athletes that were a part of it. 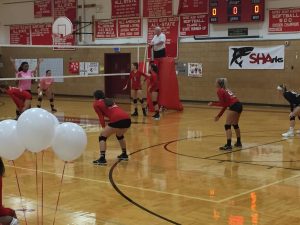 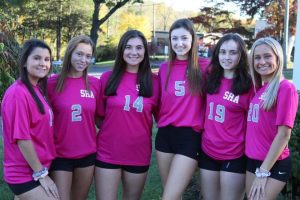